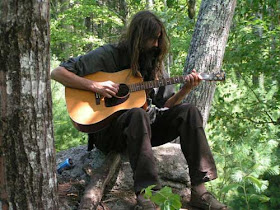 Before I get started talking about the mysterious history of Eldemur Krimm, let me first give a shout out to Bill from the Soda Shop for recommending these guys to me. You see, prior to his recommendation and my ensuing research for this edition of Flashback Friday, I knew nothing about this band from Portland, Maine…never even heard of 'em. I also want to add that subsequent to this brief glimpse into the band's history, you can check out a review of their album Dirigo that was recently posted over at the Soda Shop right here.

The story begins in the early 2000's, when the band was already infecting the Northeastern United States with its distinct sound, which blended bluesy psychedelic rock with the intricate and improvisational grooves often associated with jam bands. Eldemur Krimm were comprised of three Portland rock vets, including Fred Dodge (ex Swamp Witch Revival and Stoned Lily) on vocals and guitar, Jason Marshall (ex Petting Zoo and Trivium…no, not that one) on bass and Stefen Samuels (also ex Trivium) on drums. The guys made two attempts at complimenting their sound with a second guitarist, first with Neil Collins (ex Lincolnville and Twisted Roots) who would play with the band for about a year before skipping town to sail to the Carribbean (really, you can't make this stuff up) and then briefly with Matt Robins from local rockabilly legends King Memphis. But at the end of the day, the true essence of Eldemur Krimm would emerge as that of a power trio.

And what of the band's name? Well apparently it was taken from a character out of Dodge's own science fiction writing. How appropriate then that the singer was once quoted as describing his band's sound as "sci-fi rock". And you can hear it for yourself on Krimm's 2003 debut Dirigo (the name of which is an homage to their home state as it is the official motto of Maine and means "I Lead" in Latin). A true underground classic, the album featured a healthy dose of all the quirky, sludgy and twangy elements that gave the band their one of a kind sound…like Primus riffing on Sabbath with Gregg Allman along for the ride. Perhaps an even better description comes from John Althoff of the band Conifer who once said Eldemur Krimm was "like Mountain on crack"…referring to the classic American rock band who gave us "Mississippi Queen".

Dirigo was released on the band's own Yog-Sothoth Records, another name that sheds a little light on what made Eldemur Krimm tick, as the word "Yog-Sothoth" comes from the works of classic horror/sci-fi/fantasy writer H. P. Lovecraft. And speaking of what made the band tick…Dodge once said the inspiration behind his tripped out, backwoods lyrics was "growing up in Isleboro", an isolated Maine town that the singer described as "lawless"…and perhaps more importantly, as having "the most potent marijuana ever grown". But it wasn't just Dodge's lyrics that cast a frighteningly mystical aura over Krimm's sound…it was also his appearance. The man is an imposing figure, standing six feet, eight inches tall and sporting a greying beard down to his chest, he looks kind of like a cross between Rob Zombie and Gandalf from The Lord of the Rings.

The band's aural and visual quirkiness provided them a cult following that resulted in countless gigs in and around the Portland area. These shows eventually led to a friendship with Indianapolis riff-meisters Devil to Pay, who in turn invited Eldemur Krimm to support them on their 2006 tour through the midwest and western United States. On the heels of this tour, which was a resounding success, the band quickly began work on their sophomore album Trainwreck on a Ship. It seemed as though they were on the brink of breaking out of the burgeoning Portland music scene from which they'd spawned…and then they disappeared.

Trainwreck... was unfortunately never released…although I'm fairly certain there are copies floating around out there, no official album exists. As always with Flashback Friday fodder…keep your eyes open. Unfortunately, Krimm disbanded in 2008 for reasons that are not apparent to this writer. Here's what I do know…Neil Collins and Matt Robins (the two attempts at a second guitarist) are now playing in riff-heavy rock band Murcielago. Stefen Samuels is also active, playing with another Portland rock outfit called Clubber Lang. Jason Marshall has played with indie rock band Subject Bias, but any recent music activity is unbeknownst to me. As for Fred Dodge…who knows…he's a ghost. The best I can tell you is something I read online…"he's a warlock in the great Maine woods where doors to other dimensions exist." You know…it sounds about right to me.