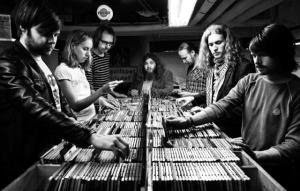 As also seen on The Soda Shop
The Crystal Caravan are probably Sweden's best kept secret. Well guess what? The cats out of the bag. The gig is up! The secret is out, here's The Crystal Caravan. They're one of the best bands to come out of Sweden since Graveyard. They play some of the best classic rock music that you haven't heard, yet. They've put out a self titled album in 2009 and a second followup album, Against The Rising Tide, is due this week (October 28th, 2010). The band is a 7 piece from Umeå, Sweden. Sometimes when you have bands that have more than 5 members yo question their quality and question if that may be enough. Seven is a lot, but they make it work and you'd think that this no more than a 4 piece. Fear not, kick ass rock and roll is here to stay and The Crystal Caravan are going to be the ones to hand it to you.

Continue reading over at The Soda Shop
Bufftbone at 3:01:00 AM
Share