The Red and the Black
Washington, DC
March 13th, 2010
The Crimson Electric
The opener for tonight’s stoner rock extravaganza at The Red and the Black was Virginia Beach’s The Crimson Electric who blasted the early arrivers with a fuzzed out wall of noise that sounded an awful lot like the desert rock perpetrated by Kyuss back in the early 90’s. With guitarists Will Sprague and Brett Mathews, bassist Dan Luper and drummer Brian Malbone cramming the tiny stage, vocalist Josh Nelson was forced to get up close and personal with the audience, literally performing from the venue’s floor. The singer wailed into a 50’s style microphone that could have been fit for Elvis, but somehow seemed perfect for The Crimson Electric’s driving, riff heavy tunes. Standing so close that I nearly caught a stray elbow from Nelson as he whirled around with his eyes closed, obviously feeling the energy from the gut-rattling riff-rock blasting behind him, I couldn’t help but crack a smile as my head began to nod uncontrollably. This was beginning to feel more like a stoner rock community gathering rather than a concert. And when Todd from King Giant walked up with a handful of shots for the guys onstage, that feeling was confirmed. If the opener was any indication, I was in for quite an evening. 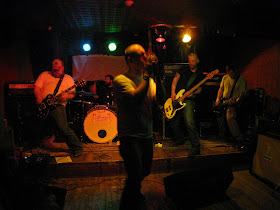 The Resurrection Sorrow
Continuing in the doom and gloom department, The Resurrection Sorrow (great name) upped the ante by bringing a little New York City swagger to the stage with them on Saturday night. With a lineup consisting of Alex Dementia on vocals, Zak Gross on guitar, Alex Coelho on bass and Louie Gasparro (formerly of legendary NYC bands Murphy’s Law and Blitzspeer) on drums, the band picked up where The Crimson Electric left off, pummeling the crowd with riff upon riff of pure heaviness. Touring in support of their latest release "Hour of the Wolf", The Resurrection Sorrow’s music was every bit as impressive as the other bands on the bill, but unfortunately Dementia’s vocals suffered from technical difficulties with his cordless microphone. 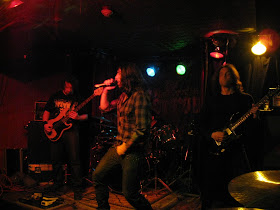 This of course led me to question the need for a cordless mic in a venue the size of your average living room. And it was that aura of "rock star" posturing that held me back from truly enjoying The Resurrection Sorrow. With Dementia dramatically falling to his knees, spinning around in circles and relentlessly antagonizing the sound tech about the problems with his mic, I got the impression that the band, or at least their singer, was trying to play an arena, not a club. That notion wasn’t lost on Brett Mathews, The Crimson Electric’s guitar player, who could be heard heckling The Resurrection Sorrow between songs with comedic one-liners like "pure vocal sex" aimed at Dementia and "string mayhem" meant for Gross. Don’t get me wrong, Mathew’s barbs were purely fun in nature and really leant more to that aforementioned "community" feel than to anything antagonistic, but regardless, his comments were dead on and the ensuing laughter from the audience was proof that he wasn’t the only one thinking it. 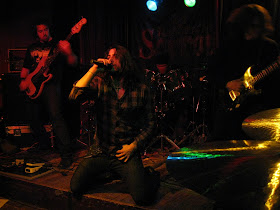 Dementia and company were good sports about it though and by the end of their set they seemed to settle down and get comfortable in the tight quarters of The Red and the Black. The vocalist even offered an apology for his incessant complaining, saying that he "isn’t trying to be a bitch" about the feedback issues with his mic, but by this point his frustration had become painfully obvious. No matter, the crowd seemed willing enough to forgive and forget, and they showed their solidarity with raised fists and banging heads throughout the remainder of The Resurrection Sorrow’s set. 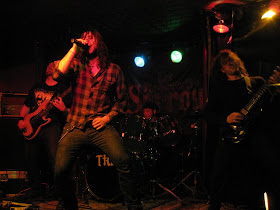 King Giant
When it came time for King Giant to hit the stage, the crowd had swelled to maximum capacity and literally filled the room from wall to wall. Guitarist David Kowalski, bassist Floyd Walters III and drummer Brooks set up shop onstage while guitarist Todd Ingram and vocalist Dave Hammerly made space down front. Hailing from the DC suburb of Pimmit Hills, Virginia, an "old, white trash, pagan neighborhood…full of bikers…and a great place to live" as described by Walters, King Giant appeared prepped and ready to put a cherry on top of this sludge rock sundae. 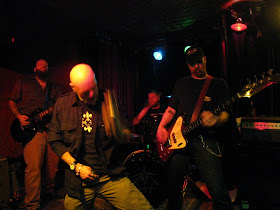 If there was any doubt whether King Giant could recreate the sound of their stellar "Southern Darkness" album in a live setting, they were laid to rest as soon as the first chords of "Lady Whiskey" chugged forth from their amplifiers. The band was tight, their sound was dead on and when Hammerly crooned the song’s opening manifesto, "does he have any idea what he’s getting into…maybe I should buy him a bottle or two" into his microphone, the stage was set (pardon the pun) for an onslaught of pure, blue collar, booze soaked, doom rock served up Southern style. 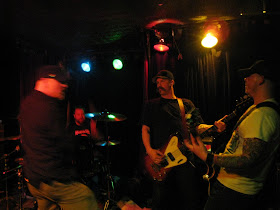 Speaking of Hammerly, the vocalist spent as much time singing to the drum set, a la Jim Morrison, as he did to the audience. Make no mistake, this is no criticism, the standoffish attitude actually works quite well with King Giant’s style and sound. In fact, you get the impression these dudes don’t give a shit if there’s anyone in the audience or not, they’re here to jam and dammit…that’s just what they’re gonna do. 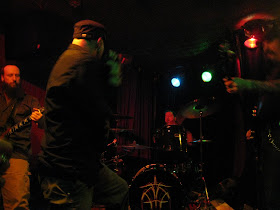 Another highlight of the set came around the midway point when the band launched into "Mississippi River", a creepy little number that Floyd explained was originally written by his old band Blue Balls Deluxe (seriously, how can you not love these guys). The song finds Hammerly rasping "I gave her a lesson someone needed to give her, now they’re dragging for her bones in the Mississippi River" and features a sinister, bluesy riff that matches the evil tone of the lyrics to perfection. By the time King Giant wrapped up their set with the one, two punch of "Machine Gun Mantra" followed by "Solace", the place was a sweat soaked cesspool and every ear drum in the room had been beaten to a bloody pulp…mission accomplished. 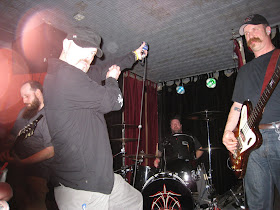 After the show, when asked what’s next for King Giant, Ingram mentioned a new album in the works with plans to eventually play Philadelphia…New York…then maybe make their way down South to Raleigh and Atlanta…slow and steady. That plan of attack seems like a perfect summation of their sound as well…slow and steady. I for one have absolutely no problem with that. Wherever King Giant goes from here, count me in as being along for the ride. 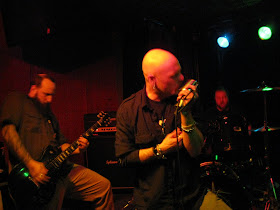