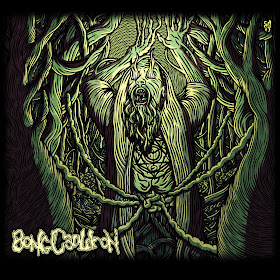 The UK's BongCauldron get their green teeth stuck into 2014 with their debut release, the self titled "BongCauldron" released on Superhot Records, which contains 5 hits of big fuzzed, low down and pleasingly dirty stoner/doom metal with a big heap of sludge added to the deep bowl. Describing themselves as "Occult Intoxicating Doomfuck" they play "Coma-inducing, oppressive riffs" that, after the first hit will leave your head at first rattling with huge fuzz noise and then totally crushed by the billowing clouds of doom smoke delivered by BongCauldron.

"Tree Wizard" is the first hit from the bowl and from brief feedback that surges up your spine the riffs hit hard in a huge wave of weedian grooves and harsh sludge vocals that can only be coughed up from the lungs of a master bongsman. The hit rattles intensely with a catchy but pulverizing riff while violently bashed percussion drives the groove directly into your THC receptors leaving you all itchy eye'd and couch locked.

BongCauldron don't appreciate lightweights so another big hit is forced upon you with "Pissed Up" and a jammed out bass line that leads to another surge of THC fueled riff smoke that burns your lungs and steals the feeling from your legs. The groove in this hit unfolds and morphs from a stoned exultation to fast paced sludge paranoia and back again in a thick haze of slow and low then heart racing waves of impending doom.
The final minute of "Pissed Up" is incapacitated under a heavy blanket of droning sludge that briefly rises in fits and starts of stoned riffs until it all breaks down into screeching feedback.

Just when you're entering the dribbling sleepy zone BongCauldron wake you up with "Vehemence", a punch in the face offered as a big hit of some tearing thrash sludge, stinking of an EYEHATEGOD strain of heavy punk/metal. Double kicks over sludge grime make this a violently dirty hit of powerful smoke that gradually settles and slows as it takes effect and an almost relaxing fuzz tone slows to a near stop before a movement of upbeat bass precedes a surge of stoned excitation. The hit takes us then on a blaze of stoner metal elevations that rocket spaceward leaving a trail of colorful psychedelic smoke and fire.

Then comes "Gimp Jig", the biggest hit so far and one that fills the bowl with a blend of big stinky sludge and tasty bass grooves that jam out a satisfying churn of stoner and sludge metal not unlike those other dopelords Weedeater, Bongzilla and Sleep. The hit lurches along sloth-like and very highly baked until half way when a sudden rise in energy teases the senses before a heavier, slower and even more turgid sludge-out pins you to your couch. The filth then gives way to a fuzz rattling bass line and uplifting guitar riffwork which builds to a firestorm of stoner metal dedication to blow off the sludge steam; creating a gratifying hit from the BongCauldron which really hits the spot.

With the high of the previous hit still lingering, the 5th and final hit "Gauze Rite" carries forward the stoner metal dedication with satiating, repetitively heavy riffs that tumble forward with the aid of big grough, lung scorched vocals. At the half way point phazers are set to stoner-doom and so a thundering of stoner and doom metal rumbles and rattles the rafters and then builds to a bong lifting anthem that shows where BongCauldron's green hearts love to dwell.

These 3 dopelords have finely blended the rough with the groove in their heavy BongCauldron and have managed to deliver 5 hits of high grade weedian doom and sludge metal from the same strain as the bands I have already mentioned above. Go to their Bandcamp now so BongCauldron can pack your bowl tightly with their satisfying rendition of weed praising heavy metal.