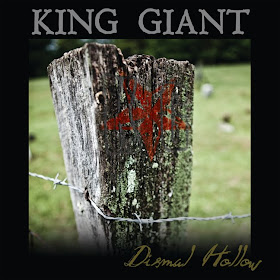 King Giant is a band whose music, lyrics, imagery, mood...hell everything that defines who and what they are…can be attributed to the solemnity, the tranquility and the aura of the Appalachian foothills where they call home. It was true on their debut album Southern Darkness and I believe it to be an even more accurate statement after having listened to this, their sophomore release. There’s a foreboding something about their songs that gives off a sort of nostalgia…like hearing granddad tell you some haunted tale from his past…you want to believe its fiction, but there’s this nagging suspicion that it just might be grounded in truth. And the thing is there’s a lot of history surrounding old Appalachia…and a whole lot of ghosts. With Dismal Hollow, the guys in King Giant are out to make damn sure those restless souls get their stories told.

Take the album opener “Appomattox” as an example. The small Virginia town is of course famous for being the location of the final battle of General Robert E. Lee’s Army of Northern Virginia…a battle that ended with Lee’s surrender and ultimately led to the end of the American Civil War. Knowing that bit of history is crucial to feeling the weight of David Hammerly’s vocals as he roars the album’s opening lines…”C’mon boy…headed to meet your maker, on a windswept field of glory…in the Shenandoah Valley.” I cannot begin to describe to you the momentousness…the significance you’ll feel when those words are combined with the dual guitars of Todd Ingram and David Kowalski. Hairs will stand on the back of your neck as bassist Floyd Lee Walters III and drummer Brooks level the rhythm section and King Giant marches forward with this instant classic, which even includes a quote from the Union Brigadier General Joshua L. Chamberlain on his impressions as he watched the Confederate soldiers march past in defeat…”as if it were the passing of the dead.” Shit man…all history lessons should be this engaging.

“Tale of Mathias” will immediately sweep you away with its catchy guitar, steady beat and a groove that is unmistakably Southern. You’ll feel shivers up your spine as you listen to this account of an abused woman’s vengeance and scorn, which is made all the more realistic, and consequently disturbing, by the inclusion of female vocals courtesy of Alexia Church, that sort of merge with Hammerly’s as they sing “he coughed and then he died…last time he ever laid a hand on me.” That theme seems to carry right on over into “A Steward’s Prayer” which features the chorus “revenge of the innocents”. The track is built around a sinister doom riff that doesn’t so much advance as it does lurch the song forward. The guitars swirl with melody, as they do throughout Dismal Hollow, giving each song a recognizable quality that simply demands repeat listening.

“Pistols and Penance” opens with the subtle plucking of a lone acoustic guitar that is eventually joined by the sheer heaviness (heavenliness?) of the entire King Giant ensemble. This one, another macabre tale of Appalachian woe, features a bludgeoning rhythmic backbone thanks to Walters III and Kowalski and accented by Brooks’ steady use of the crash cymbals and a hypnotic guitar solo from Ingram that comes off…at times…like a second vocal track…mesmerizing. And speaking of ensemble…and mesmerizing…the song’s coda sort of merges back into the acoustic guitar only this time it’s joined by a haunting cello (credited to Jonathan Stark) adding even more atmosphere to an already distinctive piece of music. Yeah…you’re gonna dig this one.

The pace of Dismal Hollow picks up on “6 O’clock Swill”, which opens with a bluesy guitar riff that becomes the rallying point for the other instruments as Hammerly bemoans “you have failed me.” In my review of King Giant’s Southern Darkness two years ago, I said that the vocals “sound like they’ve been marinated in whiskey for weeks.” Well as with anything else, the longer you marinate, the better it gets and people, it’s been two years…the vocals now sound a touch raspier…an octave lower…and ultimately a hell of a lot darker and more intense…think Kirk Windstein after a pack of Camels.

You can hear it on the following track, “The Fog” as well, when the vocalist sings over a brooding riff, lyrics that tell a tale of bootleggers running liquor “through the hills of the Old Dominion”…that’s Virginia boys and girls. This song perhaps best defines Dismal Hollow more than any other, with its carefully structured flow from a lumbering doom riff to a melodic chorus…”sins and transgressions”…into a spoken word bridge featuring what I assume to be a well placed pun…”God bless America, but God save the King”… and finally ramping up into a full blown tempest featuring another phenomenal guitar solo by Ingram. And speaking of Ingram, he's the man in the spotlight on "Road to Eleusis", a guitar driven, instrumental ode to a place often associated with the Greek mysteries surrounding life after death.

Then in true King Giant fashion, Dismal Hollow concludes with "O' Drifter", a story slightly more twisted than "Mississippi River" from their debut, about a wandering pick-up artist that no woman ever wants to meet…"by the end of the day, the side of the road would be her resting place." Hammerly sings the demented lines like a raspier version of Ian Astbury, which is to say he sounds like Jim Morrison in the middle of a week long bender. Meanwhile, Brooks, Kowalski and Walters III lay down a tormented rhythm of controlled cacophony. And with another oh so appropriate chorus…"I am the king, of all these highways…or a devil in disguise", the last of King Giant's latest LP fades away.

Listen…it’s obvious that these guys have matured as a band since we last heard from them in 2009. I distinctly remember drawing comparisons to others who traverse a similar sonic landscape when I reviewed Southern Darkness. But with this album, I don’t hear anyone other than the band who created it. They’ve found a sound that is all their own…a signature sound…and these eight tracks perfectly define that niche. This is what it takes to stand out amongst your peers. This is what it takes to carry your music beyond the confines of a regional audience. Here's hoping that the tales of Appalachian decadence and discontent found on Dismal Hollow will turn King Giant into troubadours for all the world to hear…because, by God this album deserves to be heard.