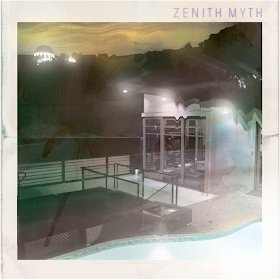 Zenith, the highest point, peak, apex, the summit... Myth, a legend, story, idea, concept...
Mike Edwards also known as Zenith Myth is the sound resonating from a broken heart. This one man ensemble, with a little help from friends, has created a catharsis. Whatever Mr. Edwards has lived, I can feel it deeply attached here on Zenith Myth.
Zenith Myth is a progressive soundscape. The listener finds themselves rising up tremendous mountains and plunging into the deepest waters alongside Edwards. Here you'll find influences that flow between the likes of My Bloody Valentine (emotional), Nine Inch Nails (industrial), Pelican (ambience), and Pink Floyd (cosmic).
The album runs as one giant 47 minute song, with each piece melting seamlessly together. Zenith Myth’s introductory song, of the same name, is colossal. Running around the nine minute mark, the track remains pretty repetitive with a heavy bass-line, becoming emotionally lighter as the song grows, and finishing with the addition of female vocals. This emotional teeter totter atmosphere rolls on until the ethereal ebb and flow of Zenith Myth pauses for “Degeration Blues” to rattle our skulls. This song is more the typical doom laden, fuzzed out riffs we are used to here at Heavy Planet. “Hot Sleeper” follows and it seems we are once again back into the airy ambience that is the structure of this record. The album comes to a close with “When All We Had Were Promises”. Using what sounds like some electronic sound effects and a simple piano piece, we are left with a few moments of silence and a recorded telephone conversation.
Edwards’ debut work is worthy of a serious listen. He mentions that his songs “form their own hybrid” sound and I must agree- I really haven’t heard much like this. I would suggest this to anyone looking for something to really get lost in.
7 out of 10
Musician: Mike Edwards
Guest Appearances:
Paul D'Amour (Tool)
Melissa Auf der Maur (Hole, Smashing Pumpkins)
Mike Bloom (Julian Casablancas)
Sam Golderg (Broken Social Scene)
Meshell Ndegeocello
Degeneration Blues by ZENITH MYTH
Web
Facebook
Myspace
Soundcloud
Twitter
Zac at 6:00:00 AM
Share