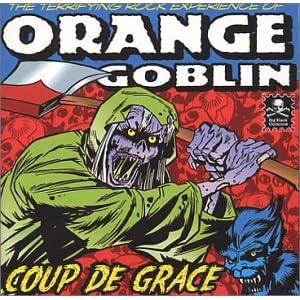 Putting on any album from the Stoner Rock genre makes me wanna drive a souped-up hotrod through an arid desert, cranking the volume and choking on dust.  I'm not sure where these Brits find inspiration in a country that's as far from a desert as you can get, but they always fail to disappoint.  Orange Goblin have cranked out three albums full of true stoner bliss, blending fuzzed-out guitar riffs with pounding, primal drums and extended spacey psychedelic jams that recall the days of some of their fat-bottomed 70's predecessors.

Their fourth album, Coup De Grace, saw the band shifting gears and incorporating some sped-up punk elements, sludgy grinding rhythms, and even a dose of catchy dog-collar twang, all while maintaining a steady hum of kick-ass buzzing guitars to keep true to the style.  The vocals have gotten pretty spooky and the samples scream of B-movie schlock, making the album almost sound like a horror film on acid.

The album's opener, Your World Will Hate This, is fast-paced and unapologetically insane and despondent.  The entire album is filled with themes of mental illness, mind-altering substances, and just all-around bad shit.  And when Ben Ward (more aggressive this time around) screams "We know that your world will hate this," it's almost as if he's letting us stoners know he's intentionally speeding up things and he doesn't care if you like it or not.  Orange Goblin change tempos on a dime and go from groovy fuzz to mud-stomping doom without pause.  Rage of Angels perfectly shifts from blistering guitar shredding to crunchy doom to laid-back, dope-smokin' psychedelia.  It sounds great, and it's one of the album's highlights.

Anyone who hasn't lived under a desert rock for the last twenty years knows a visit from John Garcia is never a bad thing.  Kyuss' legendary frontman makes appearances on Made of Rats and Jesus Beater, trading howls with Ben and doing it as well as we've all come to expect.  Scott Reeder oversaw production of these thirteen tracks, and you can hear the confidence he has in these English stoners to kick out a great chapter to their catalog.

Red Web starts out a sludgefest and picks up into a warm, fuzzy rhythm.  We Bite is a an honest cover of (and tribute to) the Misfits' quick, simple 1984 horror-punk thrasher that's not too stripped-down, not too blown-up.  Born With Big Hands, about a burly old boxer, will leave you smiling as you remember Fu Manchu and, later, Sabbath's War Pigs.  And Stinkin' O' Gin makes you wonder if these guys wore cowboy boots and ten-gallon hats while hitting a bong.  They jam beyond 7 minutes here and interweave jangling guitar around a prominent bassline.  The band still likes to break it down, too.  Getting High on the Bad Times spends the better part of two minutes in whammy-bar heaven, while Graviton is a great instrumental, spacey jam where you can catch your breath in between the pop and hiss of spinning vinyl and rainstorm fade-out.

This album's not only put together pretty well for one with so many diverging sounds and elements, it's also a lot of fun.  Some may see it as the band getting away from their roots, though they should instead hear the band expanding their style, honoring their influences, and having a good fuckin' time.  There's something for everyone here: fuzz, grind, sludge, twang.  If you already know and love Orange Goblin, don't be afraid of the adventurous spirit and tempered production of Coup De Grace, you won't be disappointed.  If you don't know Orange Goblin, this isn't a bad place to start!