Here is a band that just surprised the absolute shit out of me. As I was perusing the Small Stone records website, I came across Gozu and figured I'd give them a listen, and man am I glad I did. The tunes are not only catchy but chug along with that warm and fuzzy stoner rock groove. Think of a heavier version of Queens of the Stone Age but with a better singer (sorry not a big fan of Josh Homme's vocals). Listen. Repeat. Listen. Repeat...

"No matter how you feel about the Kyuss reunion under the Kyuss Lives moniker, I hope it has at least rekindled your interest in that heavy desert rock the boys used to make for us. Fortunately, Small Stone Recordings has been carrying the flame while the rest of you have been trendhopping like a bunch of bitches. (How’s that blackened deathgrind re-thrash emocore working for ya?) And as with last year’s revelation House Of Broken Promises, the label has given us another rare hunk of hard rockin’ gold in Gozu." Read more...

The Editor, The Dreaded Press

"OK, hold everything – I’ve just discovered what happened to the band that Queens Of the Stone Age somehow (and rather disappointingly) avoided turning into. They’re called Gozu, they’re on the perpetually reliable Small Stone Records, and their new album Locust Season is riffomatic fast-drivin’ music with a splash of dumb pop sensibilities and its tongue just a little in its cheek." Read more... 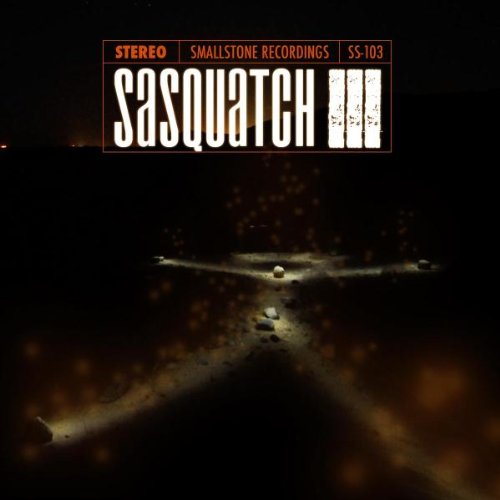 This is where the homage to Small Stone Records ends. This label released some magnificent releases this past year. The last four albums exemplify how truly great and important this independent label has become. I think that this band just keeps getting better after each release.

"With every new album, Los Angeles' power trio SASQUATCH are getting better. Well, that phrase sounds flat and empty, but it's indeed the case. At least, for my taste. This does not mean, however, that I think that the band had a bad start with their first two albums. Since the beginning it was obvious that they have the decisive potential to perform powerful riff-driven heavy rock which will be remembered for a longer period. Of course here, nothing new will be invented, but that doesn't matter as long as the tracks are packed with solid hooklines and crunchy riffs, and, boy, are SASQUATCH good at it! Their third record aptly named 'III' is a hard rocking, fuzzed-out titan which contains some of their best tracks and shows quite clearly that SASQUATCH has grown together into a strong unit over the last nine years. It is a consistent, powerful album that hits really hard at gut level." Read more...

Now, many people would say that rock and roll isn't big or clever, and there are an equal number of people that would claim that that is exactly what makes it so fucking awesome in the first place!!! The finest rock and roll bands have made careers of keeping it simple and not messing with a winning formula…AC/DC, Motorhead, the Stones…etc. If they have ever tried to mess with the formula they've invariably come unstuck and produced a turd pile bigger than old Bigfoot would be capable of!!! Sasquatch understand that to be effective rock and roll needs to be simple, powerful, fundamental and primal and so take the fuzzy grooves of stoner and mix it all up with a greasy 70's blues vibe that aims straight for the heart and the crotch." Read more... 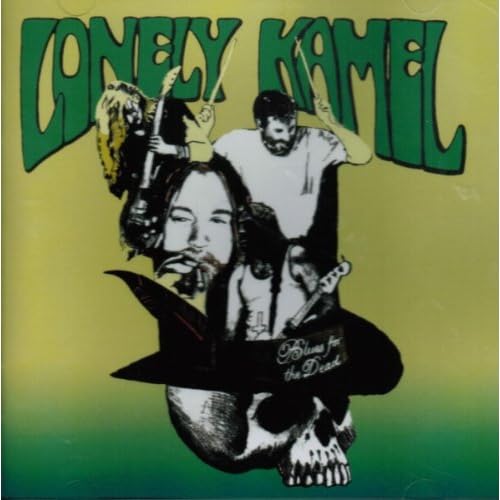 This album was a very pleasant surprise. I received it for review and passed it along to Zac. After reading his review I decided to take a listen myself. This is a great album. Very classic rock feel with amazing riff heavy blues guitar. A hidden gem.

"Blues for the Dead." and "Lonely Kamel." I really had no idea what to expect upon first listen. I wasn't blown away by the cover art; which I know may be odd, but cover art is an important part of the whole experience for me. I decided to head over to the bands myspace page and see Oslo, Norway. Nice, I have an obession with Scandinavia. First, I must say the artwork grew on me after the first listen. This is excellent! I hear thick and groovy blues rock. This album is solid. The majority of these tunes are 4 out of 5 with "Stick With Your Plan" being the stand out song. This song has a slow and steady intro and just jams at approximately 1:45! Some of the grooves in this track just bring the vision of a lovely woman's hips swinging! For me, everything just melts together and flows through you, and it feels damn good. If you are looking for some groovy, blues influenced, hard rock, this is the album for you."

"BLUES FOR THE DEAD is certainly an interesting album, and one that I quite enjoyed. Who it will directly appeal to however is something I’m still not too sure of. Musically LONELY KAMEL certainly have their own distinct sound, which is made up by a combination of classic blues rock/psychedelica and the more modern style of stoner rock/desert rock. Which in essence means that they sound like a combination of HENDRIX, CREAM and GREATFUL DEAD with some CLUTCH, WOLFMOTHER and KYUSS mixed in." Read more...

By looking at the cover you would think that this would be pretty lame, to the contrary! What hides inside is a truly great mix of classic metal, doom, stoner and a bit of psychedelia. If you have not heard this release then you most certainly should.

"If you've ever wondered what Hawkwind may have sounded like if Lemmy stayed, went to lead vocals, and the band stayed on its psychedelic, neo-stoner, path, then you might have California's Dusted Angel and their first full length disc Earth Sick Mind. But that's mostly pure speculation on my part. Dusted Angel borrows heavily from the whole classic heavy metal motif and add equal doses of stoner rock and doom metal, with a glimmer of madcap psychedelic. There's enough images, inspiration and nuances from Queens of the Stone Age, Kyuss, Black Sabbath and, maybe, some Helmet. I think you get the sonic picture." Read more...

"Maaaaaan, that Clifford Dinsmore dude sure gets around! From Bl'ast, to Spaceboy, to the criminally underrated Gargantula, and now on to Dusted Angel, he has been yelling up a storm since 1982!! Jeeeeez, it's a wonder the guy has an vocal chords left!!

Thankfully for Clifford's Otolaryngologist (look it up smart guy!), the guy has a lot more room to breathe in Dusted Angel than in the furious hardcore of Bl'ast or the claustrophobic drugscapes of Spaceboy and Gargantula. Clifford's vocals here are certainly more restrained than in any of his previous outfits, but still intense and on-the-money. It's more of a throaty howl here than the full-on gonzo attack of Bl'ast or Spaceboy, but anything harsh would NOT suit the more straightforward, 'listener friendly' sounds of 'Earth Sick Mind'. Dusted Angel refer to themselves as 'Doom Rock', and I guess that is as apt a description as any. Too upbeat and rockin' to be Doom, yet too intense to be Stoner Rock, I guess 'Doom Rock' is what they are!" Read more... 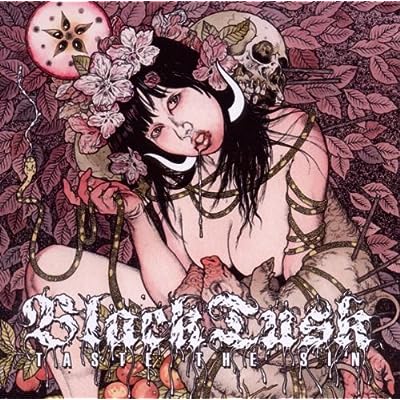 I really started to get into this band after seeing them open for Stoner Rock legends Fu Manchu. They played a blistering set and I loved the energy of the band. It looks like Georgia is becoming the hot bed for some great bands of late. Compared to luminaries such as Mastodon and Baroness, Black Tusk stamps their unique take on the ever so crushing mix of Southern-fried hardcore sludge metal.

"The single, substantive frill of Taste the Sin, the excellent Relapse debut album by Savannah, Ga., metal trio Black Tusk, comes as the final track begins. "Well, hell, World War II gave us the ball point pen," says the actor Charles Tyner in a monologue excerpted from his hilarious role as the militant Uncle Victor in the 1971 film Harold and Maude. With tales of war and murder, and his well-decorated uniform, he brings the lugubrious teen Harold to some uncomfortable intersection of euphoria and orgasm. "I say get the krauts on the other side of the fence where they belong. Let's get back to the kind of enemy worth killing." Read more...

"Savannah is a small southern town that time forgot. Isolated in antiquity and surrounded by swamp and a lot of nothing, next to nowhere, the setting provides an interesting context for a heavy metal music scene. Bands like Kylesa, Baroness and Black Tusk have sprung up out of the Georgia marsh to gain a surprising amount of influence and recognition considering their small town roots.

Make no mistake; while Black Tusk carries the distinct sounds of their Savannah folk heritage, they are very much their own band with their own sound. Kylesa wander in psychedelic aural landscapes and Baroness pushes forward with much more progressive musings in their song structure, but Black Tusk is perfectly content to smash through their own path, with thick and bottom-heavy, punchy riffs. More aggressive and more direct than their swamp sharing brothers and sisters, Black Tusk displays punk sensibilities much like punk-sludge pioneers Eyehategod and Buzzoven. The European version of the album includes a cover of Buzzoven’s “Toe Fry” which solidifies the influence of the late sludge band on Black Tusk. If you are lucky enough to get the version of the album with “Toe Fry” included, it closes the album nicely." Read more...