CoC – Blind with Age of Despair, Compression, The Ghost of Saturday Nite and Wrath of Typhon

Wrath of Typhon
When York, Pennsylvania’s Wrath of Typhon took the stage on Saturday night, only a handful of folks had arrived at Baltimore’s out of the way, dingy and altogether perfect rock club, known as Ottobar, to witness their opening set. Upon noticing the Stinking Lizaveta t-shirt adorning the band’s bassist and the homage to the recently departed Ronnie James Dio (R.I.P.) plastered on their vocalist, I figured I was in for an interesting blend of metal styles. Sure enough, my suspicions were confirmed when Wrath of Typhon churned out a chugging, crunchy, riff-fest courtesy of their Pepper Keenan look-alike (weird coincidence…considering) guitarist that, when combined with the singer’s wail (not to mention his stage antics like pointing his finger to the sky or grasping the imaginary evil orb), recalled Dio-era Sabbath to a tee. Wrath of Typhon’s sound isn’t anything altogether new, but it certainly isn’t one that ever gets old either. All told, the band was a worthwhile opener for the evening and a nice treat for the early arrivers. 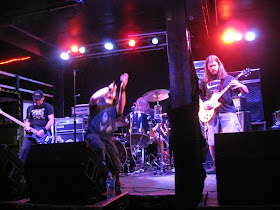 The Ghost of Saturday Nite
The next act on the bill was the three-piece hardcore/punk act The Ghost of Saturday Nite, who are one of the Raleigh, North Carolina bands (along with Age of Despair) currently touring with CoC – Blind. As the band walked onstage, their vocalist/guitarist warned the decidedly “metal” crowd that they were in for something slightly different, saying “we play punk rock…it’s like metal on heroin…you’re gonna love it”. What followed was a fun and energetic set from the band that undeservedly got absolutely no crowd response whatsoever. Regardless, The Ghost of Saturday Nite’s punk rock swagger and don’t give a fuck attitude shone through as they soldiered on from one blistering song to another, smiling and laughing all the while. The band blended the sounds and styles of SoCal bands like Social D and The Bronx to perfection and in my opinion, offered a nice break in the evening’s lineup for something a little different. 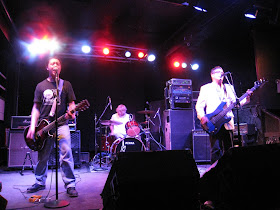 Compression
Local Baltimore natives Compression occupied the middle slot of tonight’s five band lineup. What followed was the type of unique performance that could easily be dubbed a show stealer. Mix the aural tapestries found in the music of bands like Isis and Pelican, the spaz-core freak-outs associated with The Dillinger Escape Plan and throw in a dash of the rhythm and groove of Clutch for good measure and you’ll have an idea of what took place at Ottobar during Compression’s set. People…this may be the discovery of a new genre altogether…let me be the first to dub it Stoner-Math-Post-Metal. 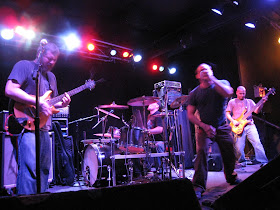 At times utilizing an effects pedal to create echoing loops in his vocals, Greg Scelsi stalked the stage screeching and grunting over the cacophony happening all around him. Meanwhile, guitarist Paul Joyce managed to cram unbelievable solos somewhere within the nooks and crannies of his heavy ass riffs and the thunderous low end created by bassist Mike Albi. To top it all off, drummer Lou Hill delivered an absolute ass beating to his kit, which was situated sideways so the crowd could witness the action in all its pummeling glory. The cracks and missing chunks in the cymbals proof positive that this drum set was no stranger to such behavior. Compression are the real deal my friends, check these guys out if you get an opportunity. 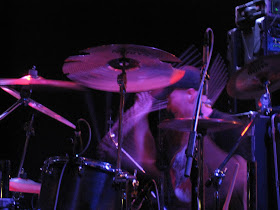 Age of Despair
After such a rousing set from the local boys in Compression, I had my doubts about whether the next band could keep the momentum going for the headliners. Led by former Confessor guitarist Shawn McCoy and featuring guitarist Marcus Williams, bassist Ali Lugo, drummer Abdala Saghir and vocals courtesy of Brian Zucarro, Age of Despair are a throwback to the early 90’s heyday of bands like Sepultura and Pantera. Throw a few sludgy, Crowbar-esque doom riffs into the formula and you have the tasty metal concoction created by these five North Carolinians. 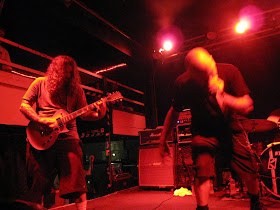 From the minute the guys hijacked the stage on Saturday night, they pummeled the now full Ottobar crowd with the aural equivalent of a military assault. Zucarro led the attack by getting up close and personal, sticking his Doc Marten right on top of the feedback amp and leaning out over the first row of the audience as he unleashed a demonic howl reminiscent of Devin Townsend (which is a very, very good thing). Meanwhile, to his left, Williams and Lugo did their best to make up for their singer’s lack of hair by flailing their impressive mops all over the stage. On the opposite side of Zucarro, McCoy took every opportunity to remind everyone that he is in fact the metal veteran of the group, as he ripped through solo after blistering solo with surprising ease. 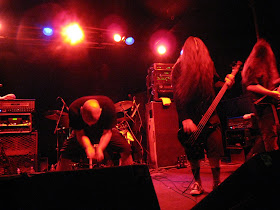 With all that chaos surrounding him, you would think Saghir would have struggled just to keep the rhythm of such a furious onslaught. Quite the opposite, the Columbian born drummer seemed to take it all in stride, laying down the beats for this maelstrom with a surprisingly calm and collected demeanor. By the time Age of Despair dove into a stunning rendition of Sepultura’s “Roots” for their finale, the entire room had become a swirling frenzy of bodies, and any doubts I had about the band carrying on the momentum of the evening, were in fact put to rest. 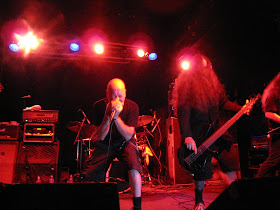 CoC - Blind
If you’re at all familiar with Corrosion of Conformity, then you know that there have been multiple variations of the band that are all very different from one another in both style and sound. Arguments abound as to which version is better…is it the early hardcore days featuring Mike Dean on vocals…or is it the more recent Southern rock sounds of the Pepper Keenan fronted lineup? Well, for my money it’s actually neither. My favorite variety of CoC is in fact the lineup that recorded the legendary “Blind” album (my personal favorite from this band), featuring Karl Agell on vocals, Pepper Keenan and Woody Weatherman on guitars, Phil Swisher on bass and of course, the ever present Reed Mullin on drums. 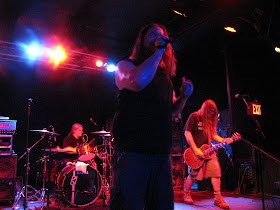 So when I heard that Mullin and Agell had actually reunited for a tour that would feature “Blind” being played in its entirety, there was no doubt in my mind that I’d be there. Of course, this newer version of that classic lineup isn’t complete, as it doesn’t include Keenan, Weatherman or Swisher. The replacement players are Scott Little (guitar) from Agell’s band Leadfoot and Jason Browning (guitar) and Jerry Barrett (bass), who both play in the solo band of legendary Bad Brains vocalist HR (who happened to be in attendance tonight…how cool is that?). Given that these last three aren’t “official” members of CoC, this version of the band was touring under the moniker CoC – Blind. Confused yet? 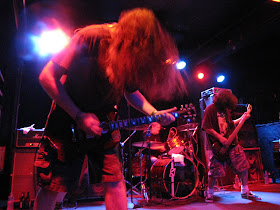 The band walked onstage to the eerie sounds of the album opener “These Shrouded Temples…” before Mullin’s shotgun blast drum rolls signaled the beginning to the political anthem “Damned For All Time”, the lyrics of which sadly seem appropriate nearly 20 years later. It didn’t take the crowd long to catch on, as it was evident that nearly everyone in attendance was there to sing along word for word to one of their favorite albums. And so when the band kept things rolling right into “Dance of the Dead”, you could barely hear Agell over the audience members as they sang the opening line in unison…”You’re Dead…”. 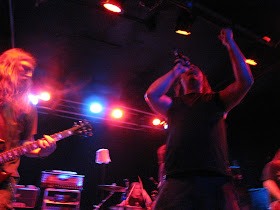 The band did a great job of recreating the album live, as I heard no noticeable flaws. Little, Browning and Barrett all played their parts sufficiently enough that, had I not already known the history of this band, I would have had no reason to suspect they weren’t original members. Mullin, who was always an impressive drummer, doesn’t appear to have lost a step in the slightest, as he demonstrated tonight with his maniacal fills and beats. As for Agell, his vocals on the “Blind” album were uniquely different from those of any other era of the CoC legacy, mixing equal parts heavy metal snarl with down home Southern soul. Tonight he recreated those vocals to perfection, stopping only occasionally to let a fan sing a line or two, or to simply say thanks to the crowd for showing up. His appreciation for being able to play with Mullin and sing these songs again was strikingly evident. 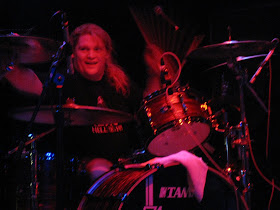 As CoC – Blind pressed on, I began to realize with each passing song that the “Blind” album is one that was way ahead of it’s time. The material sounded incredibly fresh to my ears (and by the looks of it, the rest of the crowd agreed with me) and stood firmly alongside all of the great bands I had already seen tonight. This was never more evident than when the band played the most well known of the songs from the album, “Vote with a Bullet”. On the album, the song is actually sung by Pepper Keenan, so I was curious to hear how it would translate with Agell pulling vocal duties. As with the rest of the set, it was amazing to just hear the song live and with the entire crowd singing word for word, it honestly didn’t really matter who was singing. 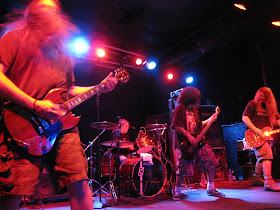 CoC – Blind threw a few treats into the set as well, like a fun little Rage Against the Machine teaser (the intro to “Killing In the Name Of…”) which they buried between two songs, and their blitzkrieg version of Motorhead’s “Ace of Spades”, which turned out to be an impressive crowd scream-along. And when the dust settled on the “Blind” album, the applause and cheers from the crowd left each of the band members smiling as they exited the stage. But none more so than Agell, who stuck around long after the others had left, shaking hands, sharing old rock n’ roll war stories and signing those well worn copies of “Blind” for fans who thought they very well may never get to hear those songs live again. 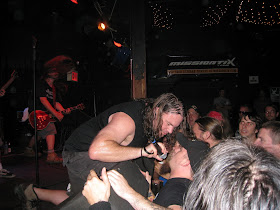